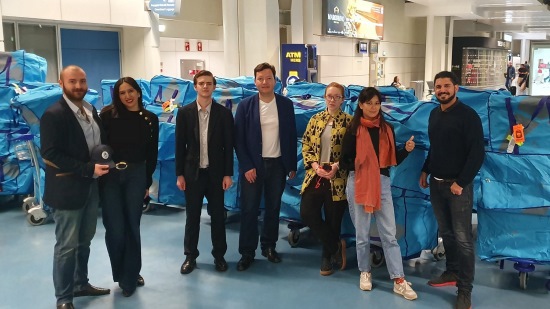 Oliver Weigelt, ACS’s Onboard Courier Manager, commented: “Our Geneva office got the call to move automotive parts from Zhongshan on the Monday. The client had looked at a regular airfreight option, but due to the holiday weekend in China there were no scheduled cargo solutions available that week. We were initially approached for a charter, but that would need seven days for permits in Asia – so our charter team passed the request over to the OBC team.

“We quickly realised that the best idea would be to truck the cargo to Hong Kong, from where there are plenty of flights to Europe, so we gathered a team of 25 couriers to await the cargo at the airport. When the trucks arrived, we had to repack the cargo from the pallets into 186 separate packages, each weighing 32 kilograms, as that is IATA’s maximum allowed weight for a single item. The first group of our couriers set off less than 36 hours after the initial call from the client, each with 7 packages. The teams flew from Hong Kong into either Frankfurt, Amsterdam or Munich, before taking their connecting flights to Porto.

“All of the cargo, a total of 186 boxes, had arrived in Porto just 72 hours after the trucks picked up the shipment in Zhongshan. Without our network offices and couriers, this shipment would not have been possible, and I now believe that there is no job too large for us to take on.”

Air Charter Service is a global air charter broker company with 25 worldwide offices, spanning all six major continents and we offer private jet, commercial airliner and cargo aircraft charters, as well as onboard courier solutions. We arrange almost 15,000 contracts annually with revenue of close to 700 million dollars. We were formed in 1990 by Chairman Chris Leach and CEO Justin Bowman in the basement of a house, and we now employ more than 500 staff worldwide.